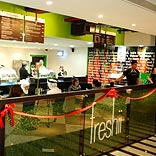 US headquartered fast-casual, health conscious concept Freshii is expanding in Emirates. The brand’s local partner Dubai franchise group has recently opened Freshii’s second location in Dubai. The new outlet is located at Al Razi Building in Health Care City. The brand’s first Middle East location was launched in 2009 in the Dubai International Financial Centre (DIFC).  “The first Freshii restaurant that opened in Dubai is one of the most profitable stores in the entire Freshii system because of the execution of our franchise partners, and because demand for our health conscious concept is very high in the region”, says Matthew Corrin, Founder and CEO, Freshii. Known for its fresh, delicious custom built meals, Freshii presently operates over 50 locations throughout North America, Europe and the Middle East. The brand is continuing with its worldwide growth and is currently evaluating other potential franchise partners for markets across MENA and the GCC region, including Kuwait, Saudi Arabia, Bahrain, Oman and others.